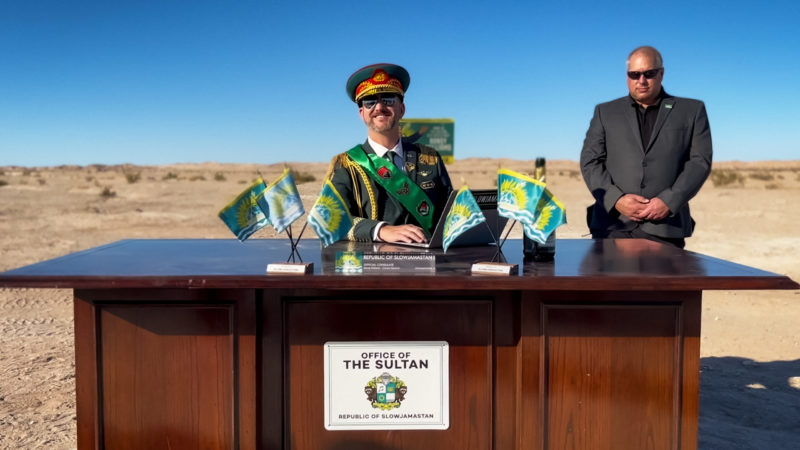 When he’s not ruling over the world’s newest nation, our Dear Leader hosts an internationally syndicated radio show called Sunday Night Slow Jams, currently heard on over 200 radio stations across America. The show airs in major markets from New York City to San Francisco – from Chicago to Phoenix, and in many big cities and small towns in-between.  (See radio station list and coverage map HERE.) Our Sultan has been a full-time radio host since the tender age of 16.

Today, he spends most of his time outside of Slowjamastan, about 70 miles away, where he works at San Diego radio stations Magic 92.5 and Z90. (His excellency hosts the afternoon show on Magic 92.5). But if you can’t find him there either, chances are he’s fled the continent: Randy’s mission in life (besides building this rad new nation) is to visit every country in the world – all 193 of them. His Excellency is currently at the five-yard line, with only 11 more nations to go! He’s expected to finish all 193 countries by January of 2023. Check out The Sultan’s official travel blog HERE.

The Sultan has written two books, produced a feature-length, award-winning film and has appeared on an episode of Judge Mathis (where he was victorious) and ABC‘s Shark Tank. Another fun fact: He still owns his very first car – a 1983 Cutlass Supreme Lowrider that he’s had since he was 15 years old.

Finally, one of The Sultan’s most important projects includes building wells for small villages in rural Africa without clean water. With the help of his listeners and supporters, The Sultan and his friends have constructed three wells in Africa since 2017. Learn more HERE.